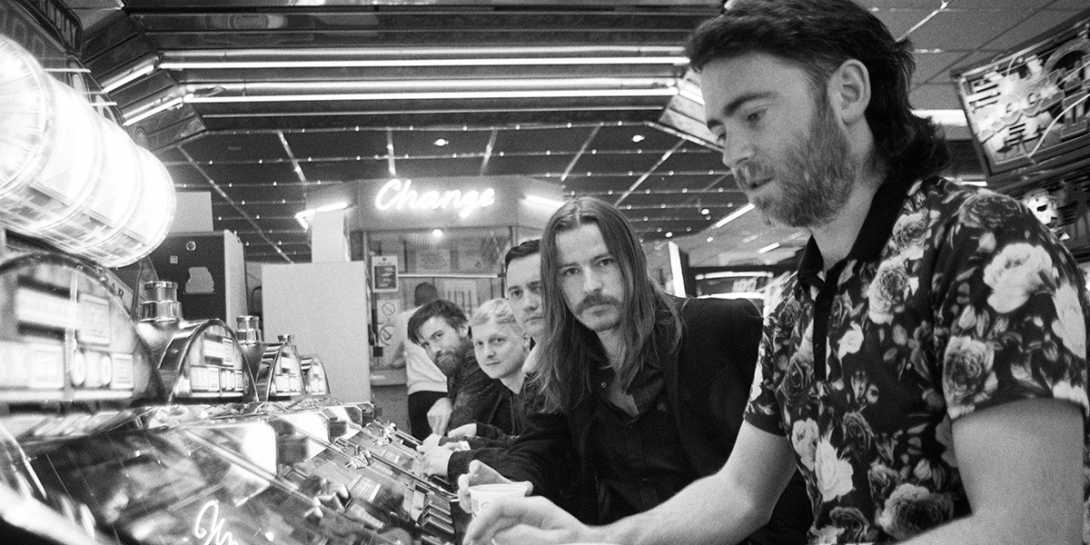 Price
£8 ADV
Buy Tickets
Seven is the magic number.  What’s more, this is about more then the number of days in the week or continents in the world - psychologists have theorised that the human memory’s ability to calibrate information on a short term basis is mostly limited to a sequence of this length. Thus, it seems strangely fitting that Pigs Pigs Pigs Pigs Pigs Pigs Pigs - the Newcastle-based maximalists whose riffs, raw power and rancour have blazed a trail across the darker quarters of the underground in the last five years -  have made a second album in ‘King Of Cowards’ which does its damnedest to take consciousness to its very limits.
Moreover,  another notable seven is dealt with here - that of the deadly sins. As vocalist and synth player Matt Baty notes “In terms of how the theme came together I’d relate it to throwing paint at a canvas in a really physical and subconscious way, then stepping back to analyse it and seeing it all as one piece. It wasn’t until then that I saw there was this continual thread of sin and guilt in the lyrics throughout the album”
For a long time I’ve questioned how and where guilt can be used as a form of oppression.  When can guilt be converted into positive action? After typing all of the lyrics up I realised I’d unwittingly referenced every one of the seven deadly sins throughout the album. That’s my fire and brimstone Catholic upbringing coming into play there!”
The period since Pigs’ Rocket Recordings 2017 debut ‘Feed The Rats’  - a mighty tsunami of rancorous riffage and unholy abjection that wowed critics and wreckheads alike - has seen the band build on their incendiary live reputation far and wide, from the sweatiest of UK fleapits to illustrious festivals like Roskilde. Perhaps the most relentlessly head-caving outfit of an alarmingly fertile scene operating in Newcastle at present, the band have all been busying themselves in a variety of activities, with Baty running Box Records (home of underground luminaries like Lower Slaughter, Casual Nun and Terminal Cheesecake) and both himself and bassist John-Michael Hedley playing in Richard Dawson’s band - indeed Dawson himself guests on ‘King Of Cowards’, both on synth and as part of a vocal ensemble on the opening ‘GNT’ - moreover, guitarist Sam Grant has been working hard on a new incarnation of Blank Studios, which began its life with the recording of this very album.
Yet once united, and building on the momentum this band has built in the last year, this opus sees them entering a new phase as a sleeker and still more dangerous swineherd, with ex-Gnod and Queer’d Science drummer Chris joining the ranks and a new approach being taken in its creation. The Iggy-esque drive to dementia, Sabbath-esque squalor and Motörhead-style dirt may still be present and correct, yet the songs are leaner, the long-drawn-out riff-fests sharpened into addictive hammerblow and the nihilistic dirges of yore alchemically transformed into an uplifting and inviting barrage of hedonistic abandon.
Moreover, against all odds, the writing of this record entailed encounters with actual pigs. “We hired a remote, converted barn in the Italian countryside and spent a week there writing the bulk of the album and trying to make friends with wild boar.” notes Adam Ian Sykes “The results are shorter, more concise songs with a little more focus, especially thematically. We wanted to shift slightly from our old jam-based way of working.
The album gets darker than Feed the Rats, especially lyrically but we also tried to get a fair amount of levity in there.”
“The creatures outside looked from pig to man, and from man to pig, and from pig to man again; but already it was impossible to say which was which” So George Orwell noted at the end of a certain slim volume. ‘King Of Cowards’ is nothing less than just such a metamorphosis, one in which - in a blur of primal urges and beastly physicality - this band shows us just which animals are really in charge of the farm.
“ One of the bands to watch in 2018.” The Guardian
“ The demons have been summoned, channeled and purged.” The Quietus
“ One of the most exciting bunch of noise-rockin’ brown-acid casualties the UK has to offer.” Record Collector
Artist Page
Support by
Bonnacons of Doom + GGallan Partridge
Watch
Image